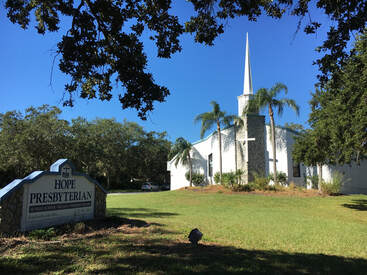 In 1964 The Presbytery's Home Mission Committee chose the 5-acre site on Belcher Rd. The church manse at 1469 Eastfield Dr. was purchased and an organizing pastor was called. (The manse was sold in 1984 to Rev. Robert Walkup.) Hope pastors now purchase their own homes.

In 1966 Organizing pastor, Rev. Jack W. Ewart began Jan. 1, 1966, with the first worship service at Oak Grove Junior High School on Feb. 6, 1966. A petition was signed by 85 persons formally asking that the new congregation be organized as a church on April 12, 1966. The formal organization service was held on April 17, 1966 in the auditorium of Oak Grove Junior High School.

In 1970 The formal groundbreaking was Sunday, January 25, 1970. The church built phase one of the master plan (sanctuary/fellowship hall, 3 classrooms, and offices. The building was dedicated on Oct. 11, 1970.

In 1976 Hope church became self-supporting and requested of Presbytery that we no longer be a mission church.

Comments from Jean Sellers:
At one meeting at Oak Grove School, suggestions were asked for a name for the new church. Names such as St. Paul's, 2nd Presbyterian, Oak Grove, etc. were given. Because everyone had such high hopes for the new church, the name "Hope" came to me and I proposed it. The names were all put on a blackboard & we voted on a name. The name "Hope" was chosen. It is my recollection that Jack Ewart later designed the little sailboat logo for the sign & our letterhead.

HOPE TRADITIONS
In addition to gathering together on Sunday, each family was assigned to a "House Church" which met in members homes once or twice a month at night. Once a year we were reassigned to a new "House Church". Because of the close association, which developed, many close friendships were formed.

Comments from Nancy Hinrichs: Every member was assigned to a "House Church". Worship in a school involved a lot of time setting up & taking down & everything had to be stored in members houses. Choir practice was held in members homes so everyone with a piano took a turn. Worship services were held outside at least once a year.

The first annual pig roast was held at Hope in 1980. Organized by Dick Pintcke, this has evolved into an annual event held on Memorial Day Weekend at Cedarkirk.

In 1974, organist Janet Brink began what is still a Christmas tradition at Hope. The Christmas tree is decorated with paper angels, bells, & trees that identify by size; hoped for gift, etc. a person who needs hope's help for a brighter holiday. Hope members take a decoration & the next Sunday return with a gift.

Session Elder Millie Shaffer began a "sewing & brown bag lunch" group for older members. They made pads for nursing homes & Sis Hinrichs holds the record for the number of pads made. With spirited leadership from Margaret Wearing & generous help from Elsie Catt, this group became the Young at Heart. They meet twice monthly for lunch, fellowship, & programs. 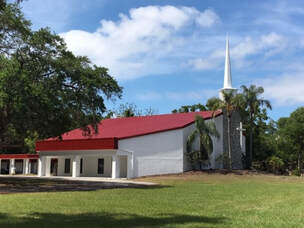 Hope Church 2019
TAPESTRIES
Until Oct. 1975, the sanctuary of Hope was decorated with banners made by the Sunday school classes. The session gave its approval to make Hope's meeting place more formal, & through redecoration, to make it more like a sanctuary. Jane Miller, Elder, talented in interior design, made choices of carpeting, wall color, & draperies. She also designed needlepoint tapestries. The church symbols she used are traditional Christian ones. The tapestries are similar, with arched inner borders that give a feeling of height & imitates that of stained glass windows. Volunteers from the congregation did the work; Nancy Hinrichs, LaRae Weaver, Mac MacDonald, Jane Miller, Carol Berry, Peggy McLane, Anne Walkup, Mary Ross, & Dot Eitel.

The 23-year-old congregation of Hope Presbyterian Church is planning a sanctuary to be constructed on the church property at 1698 Belcher Rd in Clearwater. Groundbreaking is planned for July 2, with all members invited to bring shovels and participate.

Pastor T.J. Thompson said plans for the new building began about 3 years ago. Church members were asked to close their eyes and visualize their new sanctuary and then write down a description of the images. Those notes were compiled & incorporated into plans for the proposed structure.

The worship centers now in use is a multipurpose building used for dinners, voting, & fellowship events as well as worship. It seats 285.

But the congregation, organized in 1966 with about 85 people & now with more than 250, wanted a separate site for worship. The congregation owns 4.74 acres of land, and the present structure sits toward the back of the property.

The new octagon-shaped building will seat 400 & will include a foyer, restrooms, & a communion & bridal preparation room. Extra seats can be added to bring seating capacity of 500, or 700 with the balcony area. It will be a steel structure with masonry outside & stone trim. It will have stained glass windows facing Belcher Rd. & will have a stone & wood trimmed interior.

The congregation hopes to raise $35,000, which will include money for renovations to the original building as well as completion of the new structure. Besides seeking donations, the congregation has sold plaques that individuals may purchase in memory of loved ones. The memorial plaques will be installed on one wall of the building. In addition, church members are seeking a loan from another church as well as a conventional loan to complete the needed amount.

"We hope our congregation will grow as a result of a better presence on Belcher Rd.", said Ron Priest, clerk of session for the congregation.

"The building is sort of a spartan worship center, not a gold & glittering monument to ourselves", Priest said.

Jan Regulski, who compiled a history of the congregation in 1986 for the church's 20th anniversary, and her family, have been members for about 15 years. She said that along with the new building, "part of the goal includes maintaining that (family orientation), that is the goal and commitment of people who go here".

Thompson said that at the groundbreaking, church members would burn the mortgage on the original building and bury the ashes as they break ground. He said that one of his goals is that after all new construction & renovation is completed, the church might provide a cold night shelter for the homeless. "We are building for more space but also building for more programs that will be available to the community", Mrs. Regulski said.

HAMBLEY HALL- THE STORY OF ELIZABETH HAMBLEY
Elizabeth Louise Hambley was born on June 29, 1892 in the United Kingdom. She moved to the United States in the 20's & worked as a nanny for wealthy families in West Islip, New York. She loved to tell stories about her experiences with these Long Island families & their children.   She married W. Rawson Hambley on Feb. 20, 1939. She became a naturalized citizen of the United States on July 26, 1961.

After her husband's death, she lived alone until she needed additional care & her guardian moved her to Wright's Nursing Home in Largo. She visited Hope Presbyterian Church only one time and that was to attend a potluck supper. She was so impressed with the friendliness of this fellowship time & how nice the people of Hope were to her that she decided to remember Hope church in her will with the request that one of the building be named after her & her husband. Following these wishes, the fellowship hall (which was formerly the main sanctuary) was renamed "Hambley Hall".
Elizabeth Hambley died on June 9, 1983, just days short of her 91st birthday.

SANCTUARY RECOLLECTIONS
February 25, 1990 - Raising of the steeple on the sanctuary.

Stained glass windows: Nancy Hinrichs, Betty Massey, Barb LeRoux, and T.J. Thompson undertook the design and building of the new stained glass windows, and with the assistance of Glass Horizons developed the beautiful windows which shed rainbows of color throughout our Sunday worship & form memorable symbols of our faith illuminating Belcher Rd. at night.

Funds toward the purchase of a new piano were donated by Dorothy & LeRoy Weaver. Selection of church furnishings was overseen by Robbie Montgomery, Bob Stevens,Kathryn Stevens. & The worship ministry. Scott Stevens developed a landscape plan for the front of the church, raised the funds, & organized the planting days to complete his project for his Eagle Scout badge. Dean Barry selected trees & shrubs to complete the landscaping of the entire church grounds as we planted over 17 trees & hundreds of bushes. A sprinkler system was designed & installed by John Guthrie, Bob Stevens, & LeRoy Weaver. Bob Moss contributed the paint & with several work parties, the original buildings were painted to match the new structure & the existing brown trim was replaced by blue fascia to match to new roof.

RAISING HOPE
Raising Hope was celebrated throughout the project by several memorable services beginning with the burning of the mortgage from the educational buildings & the groundbreaking for the worship center on July 2, 1989. All attending were invited to bring shovels & help dig the footers. The building facade went up rapidly. On Nov. 5, 1989, following the church service, members were invited to come into the building & write special messages of hope & dedication on the unfinished walls so that throughout the years, all that entered our church would be surrounded with silent messages of love & faith. The most evident day that completion was near was heralded by the raising of the steeple on Feb. 25, 1990. As members tugged the pulley rope which lifted the steeple in place (with a little help from the Caladesi crews!) we knew our building was nearly ready for worship. The first complete service celebrated in the new sanctuary was Palm Sunday, 1990, & the worship center was formally dedicated by an interdenominational community service on Oct. 21, 1990.

1984: Rev. Robert Walkup resigned to accept a position with the Medical Benevolence Association.

2007: Pastor Dembroski served until May 31st, 2007 resigning to take a call to Mifflin Presbyterian Church in Gahanna, Ohio.

2008: Interim Pastor John Harris was called effective February 15th, 2008 and served in an interim capacity until the new pastor was called.

​2016: Stated Supply Pastor David Hosick was called to Hope in May of 2016.
​
HOPE PRESBYTERIAN CHURCH