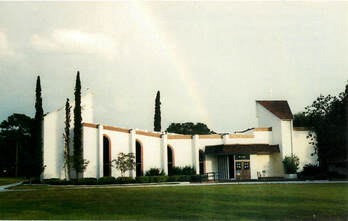 Highland Church
HIGHLAND PRESBYTERIAN CHURCH
HISTORY  -- in large part taken from the 1982 Congregational Picture Directory
Other foundation can no man lay that that which is laid which Jesus Christ.    (I Cor 3:11)
Highland church was organized by the West Florida Presbytery of the Synod of Florida on May 3, 1964.  As that time the church met in the Belcher Elementary school with a membership of 91 and a financial budget of $6,000. The church continued to grow at an almost perfectly even rate over the years. As of January 1981, it had a membership of 800 with a subscribed budget of $145,000.  This was a 22-fold increase in 17 years.

The first worship and church school unit, known as Fellowship Hall was built and dedicated on November 20, 1966, on 2 1/2 acres of property.  Through a planned expansion program, the second unit for Christian Education was dedicated in June 1969.  The sanctuary and office section were built and dedicated in October 1971.  During these years, the Church was never without a Building Committee.  In June of 1972, property facing Rosery Road was purchased adding another 2 1/2 acres, and in August of 1977, the Davis property to the North was purchased, which added another 2 1/2 acres and included a house.  Additional office and church school space was added to round out the building in 1981 and was paid for in cash on completion.

By 1982 the facilities were valued at $765,072, not including the contents. These facilities were designed to handle two services with approximately 500 persons per service.  In addition, the church increased the mission it paid out (benevolences) over 70-fold, from the original $339 to $24,800 in 1982.  During its period of growth, the Church sought to remain friendly, personal and committed to it original intent.

Over the years stories were told of vibrant Sunday school, an excellent choir, and even a horse (Bucky, who lived just beyond the fence) who was considered an auxiliary Sunday School teacher.

In the 1978 church directory Pastor Franklin McHendry wrote:
Dear Highlanders:  This is a book of Fellowship and Love.  It is the faces of our family, the picture of a happy strong church because it is built on the Scripture as the Word of God, the only infallible rule of faith and practice, and on acceptance of one another in the knowledge that we are saved only by the Free loving Grace of God.  This book fixes for a moment in time those of us who at this time are the church…

In 1986 Pastor Franklin McHendry wrote in the church’s third pictorial directory …. The membership is about the same as it was last printing. These are the Happy Highland faces that you meet in work and worship, doing the task of the church. These are the faces of families bound together in worship and prayer with and for each other.